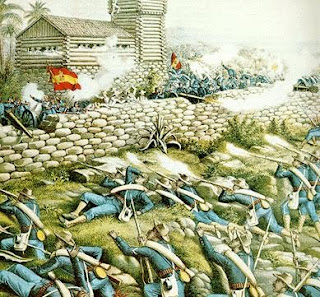 Before he became president and started busting up trusts Teddy Roosevelt and the Rough Riders duked it out in Cuba with the Spanish at the battle of San Juan Hill during the Spanish American War..
U.S took heavy casualties taking the hill because the Spanish used a type of rifle that had greater range than the Rifle used by the Americans.
One of the famous regiments involved in this battle was 10th calvary “Buffalo Soldiers” a famous regiment of African American soldiers.
Who are made famous in the Bob Marley song Buffalo Soldier.

One thought on “Teddy Roosevelt and the Rough Riders”