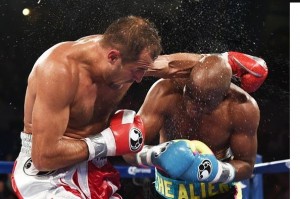 In the fight we  found out a lot of things in Sergey Kovalev’s fight with Bernard Hopkins.

We found out that Kovalev is a skilled boxer, who could work at a measured pace, take a decent punch , has defense , is able to mentally compete at the highest level, is a tremendous athlete who is able to go 12 rounds .

We saw that Kovalev’s punches lost some snap on them in rounds 9-12 but still had plenty of pop on them.