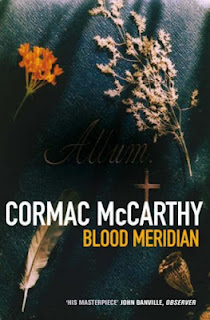 I have been reading the book “Blood Meridian” by Cormac McCarthy. It is  a violent tale of the South Western Region of North America taking place in the 1840’s.

McCarthy is a fantastic writer almost more of a poet than a Novelist , creating fantastic violent imagery.

My one criticism is that McCarthy doesn’t use quotation marks and it is sometimes hard to know who is speaking in the dialogue. On the other hand it is a testament to his writing that I can follow most of the time who is speaking in the dialogue with out quotation marks, as I have to use McCarthy’s  queues  of context, logic and narrational rhythm to effortlessly follow along.

This is the first fiction book I have read of my own volition in about 5 years. I usually am reading about 2 non fiction books at a time.

Third world garbage dumps.
Poor people scavenging in the dumps.
Soldiers shooting at the human scavengers  as if the people were feral dogs,
the people are of the same ethnic group as the soldiers ,
really cousins at heart, soldiers work for the governments,
who work for the corporations,
who create the economy
and consumer products that fill the garbage dump.

The economy is alive but it is uneven, with some pockets of extreme growth and some lagging sectors, with a fair dose of inflation thrown in.

Ben Bernanke plans on buying toxic debt at a  40 billion dollar a month clip as he long as he see’s is necessary.

Rigondeaux on of the greatest amateur champions ever , looked good but not razor sharp as he had been distracted by management problems. Rigondeaux was in control of his fight 90% of the time but was wobbled by left hooks twice.

Great fight to determine who is the king at 160 pounds, with Martinez deciding this definitively , but it wasn’t easy as Martinez after dominated most of the fight was almost KO’d in the 12 round and after the fight Martinez was found to have fracture in his left hand and torn ligaments in his knee.
At the age of 37 Sergio Martinez probably doesn’t have many more fights left at the top but came through big the night that he had to and cement his legacy as a very good Middleweight champion.

In an all action fight of the year type of contest. Rene Maidana defeated Jesus Soto Karass in a blood and guts all action 147 pound fight.

Must have some tough economy down in Argentina to produce this type of fighters from a nation with a demographics base of around 41 million people.

Is the name of the economic system that most of the planet falls under today.  This system is promoted by the IMF, World Bank and WTO.

“Neoliberalism  is known for economic liberalizations, “free trade”, open markets, privatization of nationalized industries, de-regulation and enhancing the role of  private sector in modern society. ”
This definition was taken from Wikepedia. 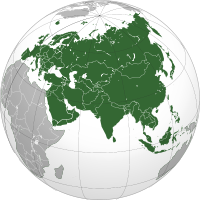 The Eurasian land mass has 60-70% of the worlds resources on it above land and below, holds two of mankind’s two most advanced civilizations Western Europe and China and is geographically centrally axial in relation to the other continents.

Gonzalez of Puerto Rico came in about 10 pounds over the weight limit.

So in an unfair fight of basically a Super Middleweight Gonzalez at 168 pounds fighting Dzinziruk a Junior Middleweight at 154 pounds the fight was fought to a draw.  Which was a win for Dzinziruk who pocketed 100,000 extra in penalties levied against Gonzalez for coming in over weight , and kept Dzinziruk in the US public spotlight.

A more intriguing character is Golovkin a former amateur stand out, who is obviously talented and doing the work out side the ring that it takes to be a superstar, things like getting the right promoter with right connections, learning English, and doing the necessary foot working promoting himself and the fight to the media.

My only question mark about Golovkin who has tremendous offense and punching power, is he seems to have a lack of defense that a top 3 Middleweight maybe able to capitalize on. This is something that will only be revealed with time and more fights against better competition.

I would rate Golovkin the 3rd best Middleweight in the world now after Sergio Martinez and Chavez.